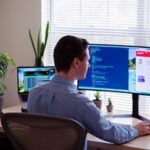 Unless you’ve been hiding in a cave, you’re no doubt aware of the buzz going down about standing up more at work. Evidence indicates that increased sedentary behaviour – i.e. sitting for extended periods – may be linked to a number of physical and psychological health issues. Hence, the growing popularity of the standing desk to get us off our butts in the office. But is a standing desk good for you?

In this article we’ll take a closer look at the increase in sedentary behaviour at work and the associated risks of sitting too much. There are also some serious health risks linked to standing too much. This may seem confusing – and also contradictory – as some risks of prolonged sitting and standing are the same, as you will see below.

But by following practical guidelines and using common sense, can a standing desk really improve health and productivity in the office? Read on to find out more. We will also take a look at some “add-on” options that are out there to help you to improve your health and your habits at work.

But first, a little about the humble beginnings of the standing desk…

The popularity of the standing desk is on the rise and the trend looks unlikely to change any time soon. But the idea of standing whilst working is not a new concept. 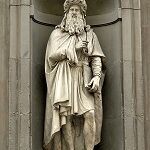 As far back as the fifteenth century, one of the first recorded users of the standing desk was artist, architect and engineer, Leonardo Da Vinci. He is known to have completed some of his most famous works and inventions whilst standing, claiming that it improved his creative energy and flow.

Da Vinci was one of just a few to hail the benefits of the standing desk at that time, and it wasn’t until the eighteenth century that the idea of standing whilst performing traditionally seated tasks began to catch on. It became accepted that sitting for too long could lead to poor digestion, aching muscles and other physical ailments.

As the standing-whilst-working trend grew, many notable figures favoured this method whilst writing, composing, saving the world and other such exceptional accomplishments…

Thomas Jefferson wrote the Declaration of Independence in 1776 whilst standing at a desk of his own design. His version had six legs to tackle the wobble problem and featured a tilt mechanism which he favoured when drafting architecturally.

In the nineteenth century, author and social realist Charles Dickens wrote standing up whilst penning his prolific contributions to English literature. Not only did he achieve great success within his own lifetime, he was also greatly influential on Victorian Britain and the reforms that were to follow.

In the twentieth century Sir Winston Churchill successfully led Great Britain and the Allies in World War 2 whilst on his feet. The achievements of this exemplary fellow also include being awarded the Nobel Prize in Literature, as well as holding numerous critical positions in U.K. parliament, both before and after the Great Wars.

Ernest Hemingway, American journalist, author and national treasure, also favoured the standing desk. Hemingway too was a Nobel Prize winner in literature and was awarded the Pulitzer Prize for his contribution to fiction – two of his great lifetime achievements.

Just a few of the big names who believed in the virtues and benefits of the standing desk, but surely some most notable and influential minds of our time (and before.) Maybe they were onto something!

But is there a place for the standing desk in today’s world? Possibly now more than ever…

Sedentary Behaviour In Our Modern World

Fast forward to today. Our habits and lifestyle within the home have changed considerably in recent years. We are less active during our leisure time than ever. You know how it is, coming home after a hard day at work, feet up and laying down on the couch, watching too much TV every evening. It’s your chill time. You’re tired. You deserve it right?

But it’s believed that inactivity and laying down too much may cause bowel and digestive problems, heart disease and a whole lot more. Tackling this problem and making changes to our home life can be a challenge, but what about the working environment?

It’s a growing concern that in our modern world we are sitting down more than ever at work as well.

“Overall, sedentary jobs have increased 83% since 1950 and physically active jobs now make up only about 25% of our workforce, which is 50% less than in 1950. Additionally, our average work week is longer. Americans now work 47 hours a week–164 more hours a year than 20 years ago.”

Health Risks of Sitting Too Much

(Rf the International Journal Of Environmental Research and Public Health.)

Although not nearly enough research has been carried out, there is evidence to suggest that sitting too much may also lead to :

…pretty serious stuff right? But on the flip side of the coin, standing too much comes with it’s own risks.

Health Risks of Standing Too Much

“Overall, prolonged standing has been observed to be a risk factor of CVD morbidity and mortality. A review from 2015 based on 11 studies suggests that prolonged standing at work is associated with CVDs such as varicose veins, increased blood pressure, and ischemic heart disease.”

(Rf the International Journal Of Environmental Research and Public Health.)

Other health problems may include…

So where does that leave us? How can we improve our health at work? Is reducing our sedentary behaviour going to do us more harm than good?

As with the above health risks, there’s also a lack of research regarding the health benefits of standing more, particularly in the workplace. However, what limited evidence there is suggests that spending more time standing may :

The emphasis here is on standing MORE but not standing TOO MUCH.

So How Much Is Too Much?

There are no hard and fast answers to this question, and there certainly isn’t a one-size-fits-all solution. A number of factors come into play here. The answer depends on your age and general health. Do you have existing health issues that affect how long you’re comfortable standing or sitting for?

It also depends on your job and the expectations and responsibilities that come with it. Some tasks are performed better when seated (e.g. those that require fine motor skills.) Others may be performed better standing up. (This takes me back to a totally old school Manager I worked with. He insisted I stood whilst on the phone making sales calls to difficult clients in order to be “above” them psychologically. Gotta admit, it worked pretty well!)

If you do need to sit or stand at certain times during your working day, then so be it. But if these times become extended, consider what changes you can make to avoid the health risks we looked at above.

Guidelines recommend that you split your sitting and standing time 50/50 where possible in the office. It’s also a known fact that some of our bodily processes slow after 30 minutes of sitting down – in particular the metabolism. (Our metabolic rate doesn’t just dictate our weight loss / weight gain…it directly affects the energy sent to all of our major organs.)

So with that in mind, and in order to keep those bad boys going at optimum levels (brain, heart, kidneys, EVERYTHING) it may be sensible – where possible – to alternate between sitting and standing every 25-30 minutes.

But please also bear in mind that any new regime may take a little getting used to. Again, common sense should come into play here, especially for those who spend a LOT of time at their desks. Start off slow and introduce your new habits gradually. I’m not a doctor, and I’m certainly not giving medical advice here, but for me personally, I took it step by step.

I usually spend 6-8 hours in front of the laptop every day. When I introduced my new regime, I began with a target of 1-2 hours standing every day over the first week. I increased it by an hour the next week, and the week after that. I now work roughly half-and-half. I’ve been doing this for the last 2 months so it’s early days, but already I feel better. I have more energy and I’m more productive. Truth! Maybe you should give it a try?

Other Options For a Healthier You

Firstly, if you’re not totally convinced that a standing desk is for you, why not go for a standing desk converter instead? These sit on top of your existing desk providing you with an elevated work station that can be easily removed if necessary. Converters are a less permanent solution with a lower price tag. Well worth checking out – see my article What Is A Standing Desk Converter? for the full run down on types, styles and important considerations before you buy.

Whether you opt for a standing desk or a converter, it’s also worth investing in an anti-fatigue floor mat. These range from straightforward, padded mats to specifically designed versions allowing for stretch, massage and acupressure functions as you stand. (Shoes off to get the most out of the latter.) If you’re going for the shoes-on option, choose footwear that supports and cushions as you stand.

Balance boards are also a great addition to the standing desk. As the name suggests, you balance on a board whilst standing. Easy right? Well, some are easier than others. Think skateboard with a roller or padding in the middle on the underside.

Mastering your balance whilst on the board is great for improving core strength and paying attention to those muscles you’ve been neglecting whilst sitting for too long. Other models simply give you the option of see-sawing your way through the day in order to allow a good stretching and a flexing. They also work the spine and pelvis area – which, if neglected, can lead to incontinence.

Ready to take it a step further? Why not add a little walking or running to your daily activities? The whole fitness at work trend is a growing business and the popularity of the treadmill desk is on the rise. These range from portable, under the desk treadmills to completely integrated treadmill workstations, easily allowing you to go from sitting to standing to walking throughout your work day.

Likewise, the bike desk is designed with activity in mind. Starting with basic foot peddlers – small, neat and totally portable – to the full desk cycle combo. You can even find desks with a two or three bike option so you can pedal away (not literally!) with your co-workers…really cool, I love this!

So…Is A Standing Desk Good For You?

As we’ve seen, some pretty notable historical figures favoured the standing desk. It took a while, but it looks like it’s here to stay. But we must remember that both sitting and standing TOO MUCH are really bad for us.

So, here is the key take-away : check out the guidelines, know your own limits – at work, health-wise, generally – and tailor a solution that is best for you…whether that’s in the form of a standing desk, a standing desk converter, or even a treadmill or bike desk!

Whatever you decide, I hope this article has answered some of your questions. Keep your eyes peeled for future, more in-depth articles about the treadmill desk and the bike desk in particular…plus many more.

But for now, I hope – if needed – you can make some changes to your work (and home) life, and that you are able to do so with a much better idea of what’s out there for you!

Stay healthy….be productive…..and please leave your comments below! Thanks for reading.